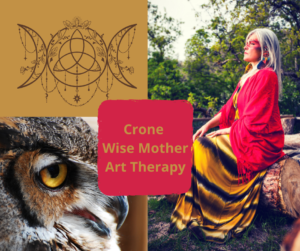 Many people assume that the word crone means witch or hag. In fact, the word crone means “crown”, and the word hag means the “holy one”. The Greek Byzantine basilica, the Hagia Sophia, created by Constantius in 360AD was originally a Greek Orthodox church, and it’s name, Hagia Sophia, means “holy wisdom”.[i] The over culture’s religious views on women changed from worshipping Gods and Goddesses to primarily male idols. The culture over time tarnished the revered names of the hag and crone.

Over centuries, millions of women were murdered by men in power who deemed them, witches. The murders were for the purpose of power, control, greed, inhumanity, and misogyny. These women were wrongly labelled as dangerous and practicing witchcraft to justify crimes against humanity. Reports revealed that many of these women were widows who refused to remarry. They were independent and collected a government pension. They met their end, the pension stopped, and their property and belongings were expropriated. Wise women who had skills and practiced the same occupations men did like midwifery, clergy, medicine, or astronomy were burned at the stake. Historically men were sacrificed to the Gods because the feminine was sacred. It was well-known that they give life, and if a mother turned her back on her young, in animals or humans, it meant certain demise.[ii]

Mature women are notorious for their confidence, wisdom, and intuition. They have passed the stage of being the fair maiden, naive, dependent, tender, and helpless. The crone has weathered rough seasons and grew strong, tough and wise. An intuitive force who sees through people can be intimidating for those with a weak ego.

The wise mother and crone archetype are unique to all humans not just women. Marie Louise Von Franz stated that archetypes are primal structures and instincts specific to all human beings and cross all cultures and generations.[iii] Both men and women have the wise mother and crone archetype within them. The crone is just one of many archetypes. Carl Jung, a famous psychotherapist called for society to bring back the feminine in religion. He felt there would be a more balanced culture, less violence and war. The masculine ego has dominated society, government, church and our businesses since the church abandoned the sacred feminine.[iv]

The great Mother archetype is one of the most important archetypes innate to mankind. Murdock stated that the mother appears in mythology and one's unconscious dream life in many imaginal forms such as the maiden, mother or the crone, and the waxing, full and waning moon.[v] She may also appear in dreams as the queen, the princess, the goddess and alternatively the witch or the hag. Neumann stated this archetype is the feminine counterpart to the masculine hero. She provides a sense of security and comfort to the person who needs to overcome their fears.[vi]

It is sacred work for mature women to embrace their journey as a wise mother and crone. She has been lost for centuries and modern media supports youth and saccharin bubble gum beauty over the revered wisdom. To help clients tap into their own crone archetype, I use a combination of storytelling and art therapy techniques. The crone wise mother art therapy group is a fantastic journey into oneself. It helps people to reflect on their lived experiences, cores values, personal power, and authenticity all the while pivoting off their reflections on the crone wise mother archetype.